Have some doubts about human-caused climate change. Get over it, liberals say. It’s an indisputable fact, a sure thing, unassailable. Science proves it and you gotta trust science.

Heck, it’s so clear-cut, even the Portland School Board has unanimously adopted a resolution that directs district officials to get rid of classroom materials that express “doubt about the severity of the climate crisis or its root in human activities.”

The Board didn’t clarify whether that meant such faulty materials were to be burned, a la Fahrenheit 451 where Captain Beatty burned books because they produce “two sides to a question to worry him”.

But scads of liberals take a different tack when the issue is GMOs. 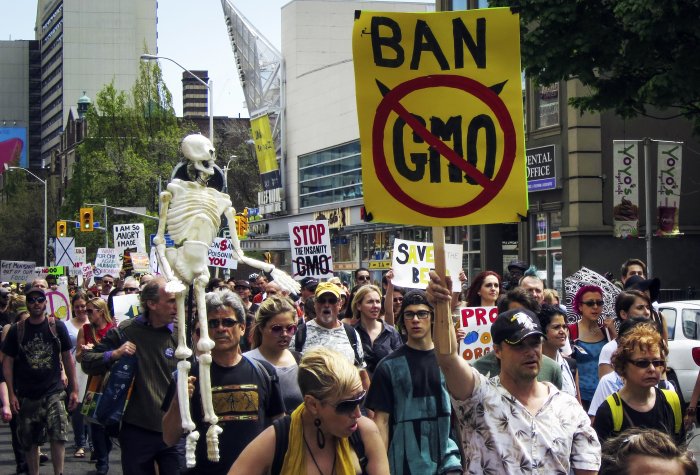 Ranting and raving that GMOs just aren’t safe, they demand labeling of products containing GMOs and insist there’s a need to protect the non-GMO food supply. In a 330-page publication dismissing the “myths” about the safety of GMOs, Earth Open Source, an organization that “is presenting the evidence regarding the social, environmental, and health impacts of GMO foods”, asserts “that those disagreeing with GMO proponents’ claims of safety include hundreds of eminent scientists.”

A display at a Costco store

GMO crops are as safe to eat as their non-GMO counterparts and have no negative environmental impacts according to a comprehensive report released on May 17 by the National Academy of Sciences —a group founded by the U.S. Congress to provide expert scientifically-based advice on a variety of issues. The report is a 388-page, comprehensive look at every aspect of genetically engineered crops.

Key messages in the report, summarized by National Geographic, are:

The National Academy of Sciences report also notes that both genetic engineering and conventional breeding are important to crop improvement. Each method has strengths and weaknesses, and treating them “as competing approaches is a false dichotomy; more progress in crop improvement can be brought about by using both … than by using either alone.”

So, will the GMO alarmists finally see the light? Will they embrace science and back off? Doubtful. But at least now there’s a stronger argument to challenge their illusions.