What is it about today’s college students, acting like they’d need smelling salts if their safe space was invaded by controversial ideas?

Commencement speaker choices now drive an annual ritual of protest, led mostly by intolerant students (and too many faculty) unwilling to have to hear provocative comments from someone with whom they disagree or who is affiliated with a disagreeable institution. Only people with the right purity of thought and action, usually a liberal, get a pass.

God forbid exposing students to ideas that might challenge their preconceptions and destroy their youthful innocence.

And the protests are not, as some would claim, exercises in free speech. The students are not just objecting to the speakers’ ideas; they are endeavoring to stifle what the speakers have to say.

Lagarde withdrew after a petition circulated on iPetitions with charges such as, “IMF… policies (have) led directly to the strengthening of imperialist and patriarchal systems that oppress and abuse women worldwide.”

At Rutgers, Rice withdrew after some students asserted that by inviting Rice the university was “…encouraging and perpetuating a world that justifies torture and debases humanity.” 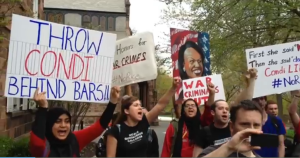 This year, dozens of faculty at John Fisher College criticized the school’s commencement invitation to former New York City Mayor Rudy Giuliani, asserting he is “a political figure who has recently shown himself to be inflammatory and divisive in his commentary.”

In Texas, student’s objected to a commencement address at the University of North Texas by Gov. Greg Abbott. The critics assailed Abbott’s views on immigration and same sex marriage and his efforts to undo a voter-approved fracking ban in the area.

The protests are part of the effort by intellectually arrogant students (and faculty) to filter out different opinions, to create echo chambers for “acceptable” views.

The protests are consistent with the push for “trigger warnings”, warnings that certain class material might make some students uncomfortable.

At Rutgers University, for example, a student wrote to the school newspaper endorsing notifications to students of material that might trigger discomfort, such as F. Scott Fitzgerald’s “The Great Gatsby,” which “…possesses a variety of scenes that reference gory, abusive and misogynistic violence.”

Even the liberal New Republic has raised warnings. “Structuring public life around the most fragile personal sensitivities will only restrict all of our horizons,” the magazine wrote. “Engaging with ideas involves risk, and slapping warnings on them only undermines the principle of intellectual exploration.”

The way things are going, the only acceptable commencement speaker will be Kermit the Frog. He’s already primed and ready, by the way, having addressed commencement Exercises at Southampton College in 1996.