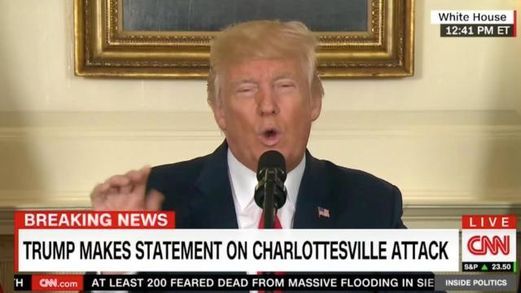 After the violent demonstrations in Charlottesville and Trump’s controversial response, the media reported eagerly on a letter signed by 67 former state attorneys general and top government lawyers reminding the country of the need to respond vigorously to hate.

“There are times in the life of a nation, or a president, or a state attorney general, when one is called upon to respond directly to the voice of hate,” they wrote in a letter released on Monday, Aug. 21.

The letter cited how, in 1976, Bill Baxley, Alabama’s Attorney General, responded to a threatening letter from a Ku Klux Klan leader. “…all who seek to equivocate in times of moral crisis” should look to the 1976 response of Alabama’s attorney general at the time to the Ku Klux Klan: “[K]iss my ass.”

Though it didn’t mention him by name, the letter was clearly intended as a condemnation of President Trump.

The media jumped on the story.

“More than 60 former attorneys general from U.S. states and territories released a letMonday seeking to provide clarity on how to respond to acts of hate,” declared the Washington Post.

“Citing former Alabama AG, officials urge Trump to tell KKK to ‘kiss my….” blasted AL.com, an Alabama news site. “The signatories represent both major parties and 36 of the 50 states, as well as the District of Columbia, Guam and Puerto Rico,” The New York Times reported.

From the headlines and stories in media across the board, most people likely concluded the letter was truly bipartisan.

I didn’t see any media outlet note that of the 67 signatories to the letter, all but 12 were Democrats, many of whom left office decades ago. It took me very little time to ascertain this from available records, so obviously the major media weren’t prevented from doing the same.

The letter was essentially a political hatchet job. This isn’t to excuse trump for his offensive comments, but to say that too many journalists hide behind a facade of objectivity. In this case, for all their claims of fairness and balance, the media owe us better.

The Washington Post highlighted that the signers included “several former officials who went on to even more political prominence,” but it cited only former U.S. senator Joe Lieberman, former Secretary of the Interior Bruce Babbitt and former Michigan Gov. Jennifer Granholm. It didn’t note that all three were Democrats.

Media coverage also didn’t note the sullied reputations of some of the Democrat signers.

None of the media pointed out that signer State Attorney General Charlie Brown, Democrat of West Virginia, abruptly resigned in August 1989 in exchange for an end to a grand jury investigation into his campaign financial records and allegations that he lied under oath and planned to pay $50,000 in hush money to a former secretary who claimed to need an abortion.

None of the media pointed out that signer State Attorney General Steve Clark, Democrat of Arkansas, resigned as Attorney General and withdrew from a race for governor in 1990 after a scandal. The Arkansas Gazette newspaper reported that his office spent a suspicious $115,729 on travel and meals, and that his vouchers listed a lot of people who said they’d never been his guests. Clark was convicted of fraud by deception.

Nobody pointed out that signer Jim Guy Tucker, an Arkansas Democrat who served as the state’s 43rd governor and Attorney General, resigned the governorship in 1996 after he was convicted of one count of conspiracy and one count of mail fraud.

As radio broadcaster Paul Harvey used to say in his velvety voice, “Now you know the rest of the story.”