Portland is turning into Paris

Protests are a recurring presence in Paris, a nearly constant inarticulate howl of anguish.

If it isn’t nurses demonstrating against budget cuts and staff shortages or faculties mobilizing against proposed university reforms, it’s protests over French labor reforms or the arrival of a controversial foreign leader. 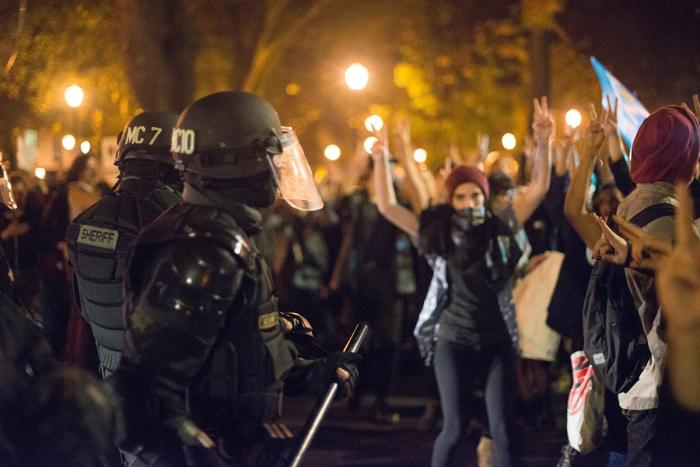 In early November protesters gathered on Waterfront Park demanding that Robert Mueller’s investigation be protected from interference by the Trump administration and objecting to the selection of Matthew Whitaker as acting Attorney General.  Indivisible Portland and Nasty Women Get Shit Done PDX organized the protest, which even drew Sen. Ron Wyden who chanted “this is what democracy looks like” with the crowd.

In October, protesters marched to protest police use of deadly force after Portland Police officers on patrol near the intersection of SW 4th Avenue and Harvey Milk shot and killed a 27-year-old man.

Also in October, police in riot gear broke up a fight at a Portland protest between the right-wing group Patriot Prayer and leftist Antifa counter protesters.

During June-July, protesters set up camp behind the Immigration and Customs Enforcement (ICE) building on Portland’s South Waterfront, insisting that ICE be abolished. The protesters vowed that their camp would continue operating until ICE shut down, but Portland Police cleared the protest encampment in late July.

The right to protest is a long-standing protection afforded by the U.S. constitution, but protests, many of which spiral out of control, have become a primary means of communication in Portland.

Don’t like the results of an election? Take to the streets, block traffic, assault people. Object to how the city is handling homelessness? Disrupt City Council meetings with shouted grievances.

Bothered by police actions? Camp out in front of Mayor Wheeler’s Portland Heights home, spread refuse, write “ACAB” (all cops are bastards) in chalk on his sidewalk, brag online about urinating in front of the mayor’s house in full view of police. It’s no wonder Wheeler was recently overheard muttering that he can’t wait for his term to be over.

Frankly, all this is getting us nowhere. A shift to civil discourse intended to enhance understanding would accomplish so much more.

“Civility is simply demonstrating respect for the dignity of our fellow humans— even those humans with whom we have sharp disagreement,” Rabbi Steve Gutow said at an Episcopal Church’s event, Civil Discourse in America. “Civility is allowing others to speak, and having the humility to admit that we may have something to learn. Civility favors truth over cheap gain, and patience over knee-jerk judgment.”

Given the complexities and nuances of the many issues before us, it’s often unclear what is right or wrong, what is ethical, or what the consequences of a policy will be compared with what is intended.

In disruptive times like these, that’s what we need most.

As James Calvin Davis said in In Defense of Civility, “When we open wide the doors of public discourse, when we extend civility and respect to all citizens and demand it from them as well, we lay the groundwork for an enriched public discourse that might just make some progress, some move toward greater understanding on the issues that most divide us.”