I was enjoying a coffee and pastry at a Starbucks this morning when a man sitting next to me checking his smartphone and reading the paper turned and said, “It looks like the rebels or the Russians might have shot down a Malaysian Airlines plane carrying 300 people. Do you get the feeling everything is just unraveling?”

A plan to transport three busloads of Central American families through San Diego for processing at the Murrieta Border Patrol station took an unexpected turn when scores of protesters blocked the buses from entering.

Tens of thousands of children of all ages, most unaccompanied by adults, are flowing across the U.S. Southwest border. Frustration and anger is bubbling up all over the country. Some people are arguing that President Obama has encouraged the stream of immigrants and that strong steps need to be taken to control the U.S. border and send the immigrants home. Others argue the immigrants need to be treated with compassion and welcomed to America with open arms in the spirit of “Give me your tired, your poor, your huddled masses yearning to breathe free…”

Whichever side you are on, and just about everybody seems to have taken sides, just 28% of the public approves of the way President Obama is handling the surge of children from Central America, according to a new poll by the Pew Research Center or the People & the Press.

Meanwhile, violence is spreading in Gaza and Israel after the kidnapping and killing of three Israeli teenagers in the West Bank set off a new cycle of violence in the region.

While Hamas militants and Israel exchange rocket fire, stories multiply of civilian deaths, including a story today reporting that four boys, ages 9 to 11, were killed on a beach west of Gaza City. 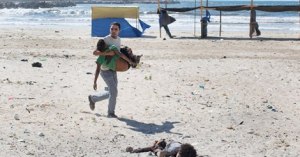 A boy on a Gaza beach killed in an Israeli attack is carried away.

Of course, the only reason similar horrifying stories of civilian killings by the Hamas militants haven’t surfaced in Israel is because of its effective anti-rocket defenses.

In Ukraine, tension continues as Russia threatens the country, pro-Russian militants fight the government’s forces and, as noted earlier, rumors swirl that a Malaysian Airlines plane with 295 on board, including some Americans, that crashed in Ukraine near the Russian border was deliberately shot down. The Ukrainian Foreign Ministry in Kiev asserted that the “the airplane was shot down by the Russian Buk missile system.”

In Egypt, after a popular uprising resulted in the first democratically-elected Islamic president in Egypt’s history, forces led by Gen. Abdel Fattah el-Sisi overthrew the fledgling president and instigated an unforgiving campaign of retaliation against the Muslim Brotherhood and regime critics that continues to this day.

In Syria, after Obama insisted that use of chemical weapons by the the Assad regime would be “a red line for us,” Obama dithered and the civil war escalated, creating a country scarred with destruction and pushing out hundreds of thousands of refugees into neighboring counries.

In Afghanistan, scene of what Obama called “the good war” that needed to be fought, chaos has ensued since the U.S. precipitously withdrew its troops.

In Iraq, after thousands of American soldiers gave their lives in an effort to create a sustainable peace, the U.S.-backed Shia-led government under Prime Minister Nouri al-Maliki initiated a cleansing of the Sunni minority. Now we have a violent struggle going on in Iraq with mostly Sunni militants from the radical Islamic State of Iraq and Syria.

A file image uploaded on June 14, 2014 on the jihadist website Welayat Salahuddin allegedly shows militants of the Islamic State of Iraq and the Levant (ISIL) executing dozens of captured Iraqi security forces members at an unknown location in the Salaheddin province (AFP Photo / HO)

Meanwhile, despite a roaring stock market, economic insecurity reigns. Just 19% of those surveyed by Pew say economic conditions in the U.S. are excellent or good while 81% rate conditions as only fair or poor. About six-in-ten (62%) still say jobs are difficult to find locally. 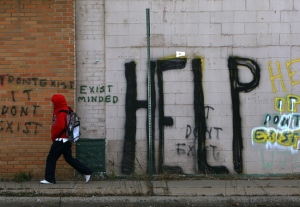 Meanwhile, Obama, “a restless president weary of the obligations of the White House,” as the New York Times puts it, jets around the world for fundraisers and dinners with celebrities and wealthy supporters, taking as many breaks as he can for golf.