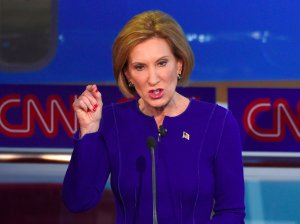 You’re probably feeling pretty good right now about your much-praised performance at the marathon Republican debate on Sept. 16. But before you settle in with a self-congratulatory attitude that you must have done everything right, let’s talk about what you said about dealing with Vladimir Putin.

“Having met Vladimir Putin, I wouldn’t talk to him at all. We’ve talked way too much to him,” you said defiantly, when the discussion turned to foreign policy. “Russia is a bad actor…”

Your campaign then doubled down, sending out a tweet, “Putin won’t listen to talk. We need leadership and resolve. Pitch in $3. Carlyforpresident.com/debate”

That kind of blunt rhetoric may be red meat to the crowd, but it’s a simplistic, wrongheaded and potentially dangerous approach to foreign policy.

Despite their antipathy to communism and hostility toward the Soviet Union, Republican Presidents Nixon and Ford and Democrat Carter all talked with their Soviet adversaries and signed strategic-arms limitation agreements with the Soviet Union.

Though he denounced the Soviet Union as an “evil empire” Reagan kept open the lines of communication. Should Reagan, often praised for bringing the Cold War to an end, not have talked to the Soviets?

President Ronald Reagan visiting Berlin in 1987, where he said, “Mr. Gorbachev, tear down this wall.”

As Strobe Talbott, who served as Deputy Secretary of State from 1994-2001, said, in his efforts to drive the Soviet Union to a more accommodating direction, Reagan emerged “as an archpragmatist and operational optimist who adjusted his own attitudes and conduct in order to encourage a new kind of Kremlin leader.”

Sure, there are times when talking or negotiating with adversaries is the wrong move. But refusing to talk with an adversary under any circumstances is not a viable option.

In the Cuban missile crisis, for example, had President Kennedy obstinately refused to negotiate with Soviet leader Nikita Khrushchev, a nuclear war might have been the outcome.

President Kennedy addressing the nation on the Cuban missile crisis

Would we really be better off today if President Nixon and Henry Kissinger had refused to talk with Chinese leaders and, instead, tried to isolate China and keep it from the world stage? 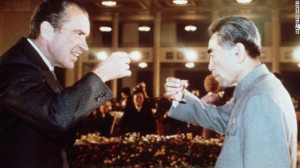 Foreign policy experts argue that America’s 21st century “War on terror” has overemphasized military responses and ignored the potential of diplomacy and that this had had “profound effects in misdirecting American power, alienating allies and discrediting worthy goals, including democratization and development.”

“Diplomacy include coercion and threats,” the experts note, “but it also requires discussion and room for bargaining between participants.”

So, before you get too far down this anti-talk road, take a breather and look at history. America will be best served by a president who acknowledges that we need to engage the world’s nations, both our allies and our adversaries. As John Donne put it so simply and eloquently:

No man is an island,

Every man is a piece of the continent,

A part of the main.

Thanks for your time,