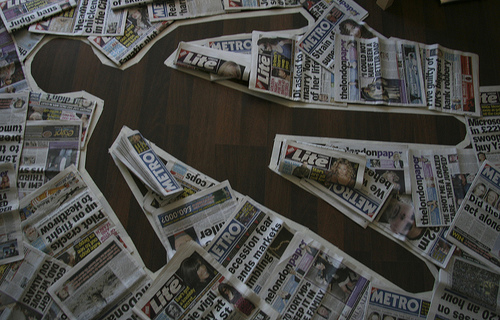 It’s come to this at our once-proud and prominent newspaper, The Oregonian.

Founded in 1850 as a four page weekly, its first issue printed in a log shack on SW First and Morrison, The Oregonian has a long and storied history.

In June 1948, The newspaper moved to a new building on Southwest Broadway.

Daily newspapers like The Oregonian were once pervasive throughout the United States, with many communities having both a morning and evening paper, and sometimes a weekly local paper as well.

When Advance Publications bought The Oregonian in 1950 for $5.6 million, its daily circulation was 214,916. The Portland Metro Area’s population that year totaled 704,829.

Coincidentally, a significant challenge to the newspaper industry’s business model, dependent on print advertising, also began about this time. Although there’s a tendency today to attribute the decline of newspapers to the Internet, it might better be tied to the advent of television, which sucked away advertising dollars that covered costs and generated profits.

In 1950, five years after the advent of commercial television in the United States, television penetration of U.S. households was only 9.0%. By 1955 it was up to 64.5% and by 1960 87.1 percent. As TV penetration grew, newspapers’ share of ad revenue shrank.

Newspapers commanded 37 percent of all U.S. advertising revenues in 1950. By 1960, that share had shrunk to 31 percent, the first downward shift in newspaper advertising since the depression. During that same 10-year period, TV’s share of total advertising rose from 3 to 30 percent.

I joined The Oregonian as a business reporter in 1987. It was a robust, well-respected paper then, with a proud past and a much-anticipated future. Daily Monday-Friday circulation was 319,624; Sunday circulation 375,914.

Much of that success has been attributed to Sandra Mims Rowe, who came on as editor in 1993 and tried to energize the newsroom with a hiring spree, bringing on reporters and editors from around the country. Under her leadership, the newsroom grew from about 280 to more than 400 and distinguished itself by winning five Pulitzers.

But the paper wasn’t able to escape the tumult of the newspaper business during her tenure. By the time she retired from The Oregonian in Dec. 2009, she had to cut staff, salaries and benefits as circulation and revenue declined.

In 2009, The Oregonian’s daily circulation sat at 268,572 and Sunday circulation at 344,950, causing the paper to lose its position as one of the top 25 Sunday circulation papers in the country. That same year, the paper announced a long-term policy that protected full-time employees from layoffs for economic or technological reasons would end.

The Oregonian’s footprint will shrink further later this month when three of its Washington County weeklies, the 143-year-old Hillsboro Argus, the 4-year-old Forest Grove Leader and the 3-year-old Beaverton Leader, will meld into one publication, the Washington County Argus. Their consolidation will mean even less local media coverage and impact.

Meanwhile, talented reporters have been fleeing in droves, some pushed out, others motivated by buy-outs. Some have decamped to other papers, others to corporate and government communications jobs. At the same time the once powerful paper has seen its clout diminish as it has abandoned rural Oregon and 7-day-a-week print distribution.

The Oregonian’s enhanced focus on digital news delivery is showing real signs of life, but it’s not maintaining the paper’s prestige and power. Digital numbers on OregonLive.com are up impressively (6,339,000 unique visitors in Jan. 2015). But with the average visitor to a newspaper website only staying on the site for three minutes per visit, many digital visitors to OregonLive.com are short-termers and aren’t loyal Oregonian readers.

So here we are. A once mighty paper hollowed out and  humbled. A growing population served by a smaller paper. A weakened paper that no longer drives the daily discussion at the proverbial water cooler (or over a latte). A diminished, editorially impotent presence with a dwindling ability to hold powerful interests accountable.

None of this is good news if you want an educated, informed public in a position to make wise judgments about public policy.

“The way to prevent irregular interpositions of the people is to give them full information of their affairs through the channel of the public papers, and to contrive that those papers should penetrate the whole mass of the people,” wrote Thomas Jefferson in 1787.

That is as true today.