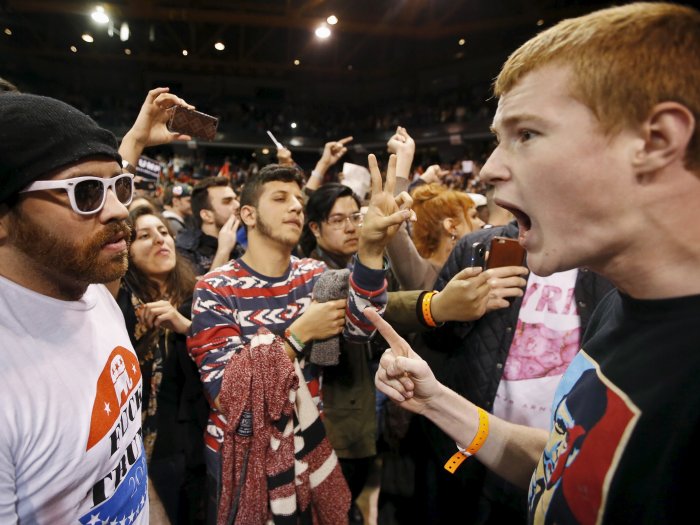 A Trump supporter (R), confronts a demonstrator after Donald Trump canceled his rally at the University of Illinois at Chicago on March 11, 2016

With all the hyperventilating by major media about the chaos that forced cancellation of Donald Trump’s planned March 11 event in Chicago, there’s been little mention of the role left-wing organizations played in fomenting and supporting the clashes with the goal of shutting down the event.

Not only that, but an analysis of news coverage by ABC, CBS and NBC found that the protesters escaped nearly all blame. By a 15-to-1 margin, the networks blamed Trump, not the leftist protesters, for the campaign violence.

“The left’s coercive tactics aimed at shutting down speech with which they disagree are appalling and un-American, and they would be shocking were they not so commonly employed; Trump didn’t start that fire,” James Taranto wrote today,

Ignored by most of the media, anti-Trump progressives played a major role in spurring the turmoil.

Prior to the event, left-leaning activist groups and individuals aggressively recruited protesters to obstruct it.  Typical was a prominent Chicago activist, Ja’Mal Green, who posted on his Facebook page, “Everyone, get your tickets to this. We’re all going in!!!! ‪#‎SHUTDOWN”. (Not everybody on Facebook agreed with his tactics. One person commented, “…the ” shutdown” caused many fence sitters to jump into the Trump camp. Stifling freedom of speech for another while gloating over your free speech stand makes no sense.”)

After cancellation of the Trump event, an e-mail from MoveOn.org, a liberal advocacy organization, highlighted “the support we provided students in Chicago last night by printing signs and a banner and recruiting MoveOn.org members to join their peaceful protest.”

“We’ll support MoveOn.org members to call out and nonviolently protest Trump’s racist, bigoted, misogynistic, xenophobic, and violent behavior — and show the world that America rejects Trump’s hate,” the email read. “And to keep it going, we’re counting on you to donate whatever you can to cover the costs of everything involved — the organizers, signs, online recruitment ads, training, and more.”

Another e-mail from ThinkProgress.org, part of the Center for American Progress, founded by Hillary Clinton’s campaign chairman John Podesta, was headlined “How Activists Mobilized to Shut Down Trump in Chicago”.

The e-mail noted approvingly that a student in the U.S. illegally had started a petition on MoveOn.org calling on the school to cancel the event, claiming that Trump’s visit was a “standards and safety issue” and that “I, and other students…are in direct danger.”

Then there’s People for Bernie Sanders, co-founded by Charles Lenchner, who was previously a founder of Ready for Warren, and Winnie Wong, a founding organizer of Occupy Wall Street who also helped launch Ready For Warren.

After cancellation of Trump’s Chicago event, the organization joyfully tweeted, “Remember the ‪#TrumpRally wasn’t just luck. It took organizers from dozens of organizations and thousands of people to pull off. Great work.” (Not all recipients of the tweet were quite as excited. One commenter said, “This is organized vigilantes against Trump/capitalism…”)

I’m not excusing Trump for his rhetoric, but reporters and the media need to do their job and report fully on the campaigns and the players, not just bury us in daily horse race stories, visuals without context and opinions masquerading as news. We’d all be better educated voters if they did.