When 69 percent of prospective voters consider you dishonest and untrustworthy, and you want desperately to put your e-mail scandal behind you, one option is to try to sway people with lots of free stuff.

Hillary Clinton has put out dozens of proposals that are going to cost billions of dollars.

A lot of of them don’t say how she’ll pay for them.

That’s the case with her $30 billion proposal to revitalize coal country, her promise of affordable broadband internet service to all households by 2020, and her proposal that start-up founders and early employees be able to have their federal student loans delayed or forgiven.

Most of the time, however, Hillary’s very clear about how she wants to pay for her federal largesse…. tax the wealthy. 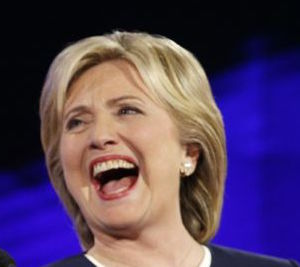 Hillary Clinton wants to cut taxes for low- and middle-income filers and raise taxes on the wealthy.

In her 2008 primary campaign against Barack Obama, Hillary said the wealthy paid too little in taxes and middle class paid too much. That was why she promised tax cuts for middle-class families and no tax increase of any kind on people earning under $250,000 a year.

This time around, Clinton is proposing raising taxes on high-income taxpayers, modifying taxation of multinational corporations and increasing estate and gift taxes. Almost all the tax increases would be paid by the top 5 percent (those earning less than $300,000 in 2015 dollars). 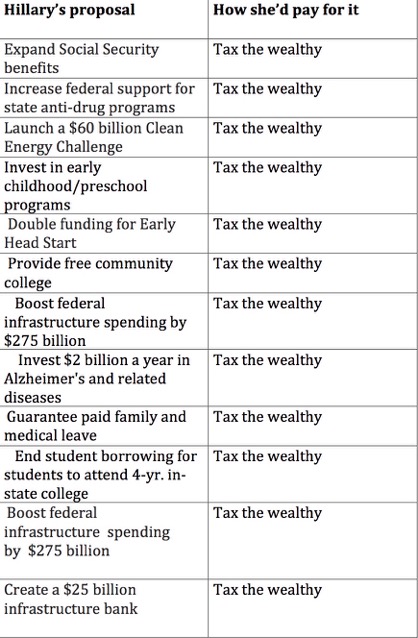 The problem is, if Hillary were to restrict her tax increases to “wealthy” Americans making more than $250,000 a year , she’d be imposing all the increases on just 2.7 percent of all filers, who already pay 50.6 percent of all income taxes.  And if she simultaneously lowered taxes for everybody else, the share paid by filers making more than $250,000 a year would pay an even larger percentage of the total. Talk about inequality!