Every once in a while politicians let the truth slip out.

The Portland City Council said it wanted to send a message about income inequality when it voted in Dec. 2016 to impose a surtax on CEO compensation. The misguided surtax, based on an arbitrary statistic, was to be added to the city’s business tax on publicly traded companies whose chief executives earn more than 100 times the median pay of their employees. No limits would apply to privately-held companies.

The city figured the surtax would generate about $2.5 million per year. Then-Commissioner Steve Novick, the sponsor of the measure, said he hoped it “would prod corporate America back to equitable pay scales.”

The surtax and the pending hike of the city’s business license tax are a part of an effort to create a “more equitable” tax structure, Commissioner Amanda Fritz said. “Taxing the rich is something people in Portland have been asking us to do.”

But Fritz’ explanation was a ruse. She didn’t vote for the tax because it would address income inequality. She just wanted the city to collect more money. That’s it. Plain and simple.

I know this because I posted a story last week about the whole CEO pay ratio issue and Portland’s adoption of the pay ratio tax. I argued that the whole pay ratio concept was flawed, misleading and meaningless.

The real motive of the pay ratio advocates, I said, was to give the left a tool to propel its inequality agenda, to promote envy and class warfare, and to argue that the once-great America as a land of opportunity is vanishing and that more aggressive government intervention guided by left wing principles is necessary.

Fritz responded to me directly, writing that the real reason for the pay ratio tax was just one word, “revenue.”  “… to expand on that, taxes pay for services,” Fritz said. “The $3 million annually collected via the CEO tax will help pay for many vital public services.” 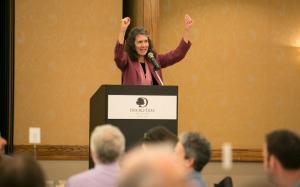 In other words, forget about all this fighting inequality blather. The city wanted more revenue and the CEO pay ratio tax was one way to get it.

It’s just another example of the City of Portland nickel and diming taxpayers.