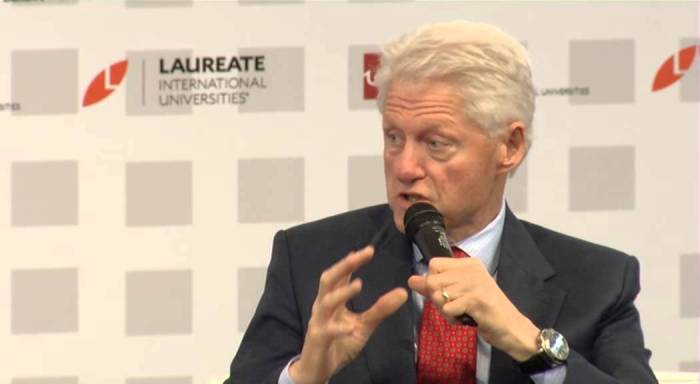 Bill Clinton at the “Laureate Summit on Youth and Jobs at Universidad Europa in Madrid, Spain in May 2013

Hillary and Bill Clinton released their 2015 tax returns on Friday, Aug. 12. The Daily Caller, a conservative website, sensed blood when it reviewed the return and concluded that of the $1,042,000 in charitable contributions Hillary and Bill claimed, $1 million went to the high profile and controversial Bill, Hillary & Chelsea Clinton Foundation.

With great fanfare, and obvious delight, The Daily Caller went on the attack, accusing the Clintons of self-dealing. Other conservative news sites gleefully repeated the story.

But they got it wrong.

The $1 million went, instead, to the Clinton Family Foundation, an entirely separate non-profit headquartered in Chappaqua, New York that was formed in 2002 and serves as a philanthropic vehicle for the Clinton family.

The liberal media exulted in the conservatives’ embarrassment. Media Matters, a progressive media watchdog, said “An embarrassing misreading” of the Clintons’ tax returns (by the Daily Caller) …led to publication of an entire article based on a “false premise”.

But the story shouldn’t end there.

If you dig deeper, you find that in addition to the $1 million that went to the Clinton Family Foundation in 2015, the Clintons donated $42,000 to Desert Classic Charities, which holds an annual PGA golf event in Southern California’s Coachella Valley. That organization turned right around and effectively returned the donation by giving $700,000 to the Bill, Hillary & Chelsea Clinton Foundation. That was the Desert Classic Charities’ largest single contribution. Other than a $295.000 donation to the Eisenhower Medical Center in Rancho Mirage, CA, no other donation exceeded $25,000.

The Clinton’s 2015 tax filing also reveals that Bill Clinton earned about $1.7 million from a consulting business he created, WJC L.L.C. That included $1.1 million from Laureate Education, a for-profit education company, and $562,000 from Dubai-based GEMS Education, a for-profit operator of kindergarten-to-grade-12 schools, which says it has a network of 91 schools serving 250,000 students in over a dozen countries. Its only U.S. school is GEMS World Academy at 350 East South Water St. in Chicago.

Selling out as a corporate shill has rarely been so lucrative as it has been for ex-president Bill Clinton.

In 2010, he signed on to become an “Honorary Chancellor” for Laureate International Universities, part of Baltimore, MD-based Laureate Education Inc. Laureate grew out of the K-12 tutoring company, Sylvan Learning Systems, in 2004 when Sylvan was spun off.

In Oct. 2015, the company, then $4.7 billion in debt, filed for an Initial Public Offering (IPO), but it has run into headwinds.

In return for serving as a front man for the privately held company, Clinton collected $16.5 million between 2010 and 2014. Laureate also has made multi-million dollar donations to the Clinton Foundation. He resigned as honorary chancellor in April 2015, but has obviously found a way to keep making money off the relationship. It will be interesting to see whether Bill Clinton benefits financially if the IPO is successful.

Bill’s income from Laureate and GEMS is of particular interest because Hillary, following on Barack Obama’s policies, has promised to crack down on the for-profit education industry.

It’s also worth noting that the Clinton’s 2015 tax filing shows their income firmly entrenched them in the top 0.1 percent of taxpayers, far from the middle class on which Hillary Clinton says her presidential campaign is focused and far from when Hillary claimed she and Bill were broke after leaving the White House.

“We have a life experience that is clearly different in very dramatic ways from many Americans,” Clinton said in an ABC TV interview in 2014.

Addendum, Sept. 6, 2016: Gee, nice of the major media to finally pick up on the Laureate connection to the Clintons:

Lots of progressives in Oregon are big on public affirmations of goodness. That’s why they love the idea of benefit corporations, such as Neil Kelly, Rogue Creamery, Metropolitan Group, Medolac and Good Clean Love.

But before Oregonians conclude that benefit corporations are by their nature more socially responsible businesses, think again, and do some rigorous research. The fact is, in some cases the designation is being used as little more than a way to add a patina of respectability to otherwise questionable firms.

For a truly inauthentic attempt at sincerity and goodness, look no further than Laureate Education, Inc. It announced plans earlier this year its plans to do a $1 billion initial public offering (IPO) that would make it the first publicly traded benefit corporation.

If you’ve heard of Laureate, it may be because of its connection to former president Bill Clinton. In 2010, he signed on to become an “Honorary Chancellor”, or paid shill to be more accurate, for Laureate. In return for serving as a front man for the privately held for-profit education company, Clinton collected $16.5 million between 2010 and 2014. Laureate also has donated between $1 million and $5 million to the Clinton Foundation.

In its IPO prospectus, Laureate says, “we may take actions that we believe will benefit our students and the surrounding communities, even if those actions do not maximize our short- or medium-term financial results.” There’s little in its history, however, that suggests such an approach is part of the company’s DNA.

“We recognized the enormous importance that society places on education as a public good,” said Douglas L. Becker, Founder, Chairman and CEO of Laureate. “This inspired us to create a culture that combines the ‘head’ of a business enterprise with the ‘heart’ of a non-profit organization. “

With one million students studying online and on campuses at 88 institutions in 28 countries, Laureate is currently a private company, but it plans to go public. The company grew out of the K-12 tutoring company, Sylvan Learning Systems, in 2004 when Sylvan was spun off.

Registration as a public benefit corporation is also no guarantee that the governance of a company will be friendly to shareholders.

Steven Davidoff Solomon, a professor of law at the University of California, Berkeley, has pointed out that Laureate’s form of governance is especially unfriendly to shareholders. While Laureate is listing its stock as a public benefit corporation, it will also be going public with dual-class stock, which will maintain its current owners’ control over the company. This includes K.K.R. which will indirectly hold a greater than 10 percent interest in the company.

This doesn’t make sense, Solomon argues. K.K.R. is out to sell its stake at the highest price possible, not benefit other causes. So one has to wonder how strongly Laureate will even pay heed to the public benefit standard.

Then there’s the question of whether Laureate’s schools operate in the best interests of their students.

For example, according to the Scorecard:

Laureate also operated The National Hispanic University in East San Jose, CA, but it closed in August 23, 2015. The San Jose Mercury News attributed the closure to the U.S. Department of Education reducing financial aid and online opportunities for students enrolled in programs that did not offer good prospects for employment. Other media reported that the school also failed to meet its goals in enrollment for online coursework.

It will be interesting to see how this company, that has a history of questionable payments to Bill Clinton, is $4.7 billion in debt, is burdened with high interest payments, has lost money every year since 2010 and has a habit of saddling its students with debt and low graduation rates pulls off its public benefit corporation charade.

It may be a hard lesson for a lot of true believers in benefit corporations.