Looks like Simon & Schuster made a bad choice in deciding to publish Hillary Clinton’s book.

Not that many people are buying it. That could say something about the depth of her appeal, beyond being a media celebrity and liberal icon. 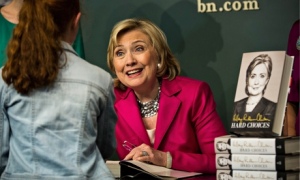 The New York Times reports (http://nyti.ms/1sGoHlL) that sales of Hillary’s book declined 43.5 percent to 48,000 copies in its second week on the shelves, according to Nielsen BookScan. That followed sales of about 85,000 copies in the first week the book hit bookstores.

And all this doesn’t take into account that a lot of people buying the book are more collectors than readers.

So far, the only attention-grabbing things to come out from all the publicity about the book are embarrassing comments Hillary has made about her family’s financial situation.

“We came out of the White House not only dead broke, but in debt,” Clinton said ABC’s Diane Sawyer, referring to the hefty legal fees incurred during their White House years. “We had no money when we got there, and we struggled to, you know, piece together the resources for mortgages, for houses, for Chelsea’s education. You know, it was not easy.”

Commenters noted that Bill Clinton earned $200,000 a year as president and that the Clinton’s huge legal debts, largely an outgrowth of Bill Clinton’s misadventures, were paid off with public contributions. They also highlighted that Hillary and Bill immediately leaped into lucrative speaking engagements when Bill’s presidency ended.

Hillary is reported to have raked in $5 million in speaking fees since she left the State Department in early 2013, much of it from speeches billed at $200,000 a pop. Bill has been even more aggressive, pulling in $106 million from paid speeches since leaving the White House in January 2001.

Hillary found herself in more hot water when she told the Guardian  she’s not “truly well off” and insisted that she and Bill “pay ordinary income tax, unlike a lot of people who are truly well off, not to name names…”  Bloomberg News later reported, however, that the Clintons have played fast and loose to stave off hefty estate taxes on their own personal wealth. “…the two heads of the political dynasty have been seizing on legal but slippery loopholes to minimize taxes on inherited wealth…,” CBS News reported.