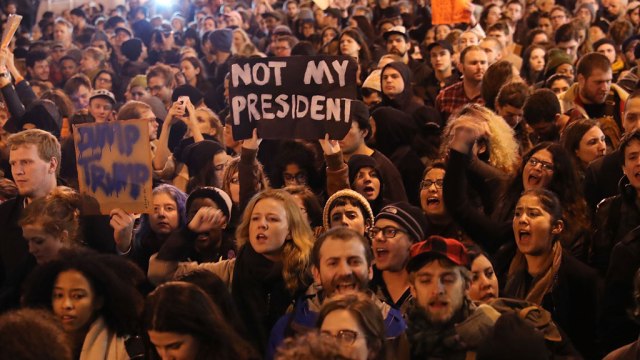 Liberals like those who condemned the owners of Sweet Cakes by Melissa are now giving a shrug to NeverTrumpers who are discriminating against Trump supporters by refusing to associate with them or patronize their businesses.

The liberals’ unlikely hero in all this today is Phoebe Pearl, a member of the famous dance troupe the Rockettes.

“Finding out that it has been decided for us that Rockettes will be performing at the Presidential inauguration makes me feel embarrassed and disappointed,” Pearl said in an Instagram post today. “…please know that after we found out this news, we have been performing with tears in our eyes and heavy hearts #notmypresident”.

“Proud that you stand up for your views/ beliefs especially to all those trumpies who are always on attack mode ready to become the vicious evil fake definitely not Christians judgmental psychos,” was posted by truthisabitch.

Boston Globe columnist Jeff Jacoby praised the Rockettes in an article titled, Freedom of Association Isn’t Just for the Rockettes.

“The right to discriminate — to choose with whom we will and won’t associate — is vital to human liberty,” he wrote today. “No one should be forced to play a role in a celebration they want nothing to do with, or to hire themselves out to clients they would prefer not to serve. A liberal baker who declines to create a lavish cake decorated with the words “Congratulations, President Trump” is entitled to as much deference as a black baker who declines to decorate a cake with the Confederate flag…”

Pearl’s post follows actions by other NeverTrumpers asserting their intentions to discriminate against Trump supporters.

HeatStreet, a conservative leaning news website, reported in early December that some Wash., DC homeowners were removing their Airbnb listings so they wouldn’t be put in the position of renting to “…the residents of flyover country.”

“I have a visceral reaction to the thought of having a Trump supporter in my house,” said one Airbnb host. “No amount of money could make me change my mind. It’s about moral principles.”

Television chef Anthony Bourdain said he wouldn’t patronize a restaurant at the newly opened Trump International Hotel in Washington, D.C. “I will never eat in his restaurant,” Bourdain said. “I have utter contempt for him, utter and complete contempt”.

Designer Sophie Theallet gained some notoriety when she flamboyantly announced on Twitter that she would not dress or associate with Donald Trump’s wife Melania when she becomes first lady. She also called on other designers to follow her lead, saying “Integrity is our only true currency.”

Is all this a liberal double standard?

In 2013, Aaron and Melissa Klein, the owners of Sweet Cakes bakery in Gresham, OR refused to bake a cake for a same-sex wedding of a lesbian couple because of the Klein’s Christian beliefs against same-sex marriage.

In early 2015, then State Labor Commissioner Brad Avakian made a preliminary finding that the Kleins discriminated against the lesbian couple on the basis of their sexual orientation.

In July 2015, Avakian ordered the Kleins to pay $135,000 in damages to the couple for emotional and mental suffering they experienced because the Kleins had refused to sell them a wedding cake.

“The Kleins are religious zealots, and not very bright,” wrote one supporter of the decision. “They should stick to baking cakes, and leaving their religion in the back room and/or at home and at church. When one opens their doors to a commercial enterprise, they don’t get to tell people to —- off based on purposeful discrimination.”

The federal government, while asserting that you can’t discriminate on the basis of race, color, religion, sex, and national origin, doesn’t prohibit discrimination based on a person’s political bent. So the NeverTrumpers aren’t breaking the law when they support the ability of businesses to ban politically offensive customers, but how is that position morally different from the position the Kleins took?

Do the liberal NeverTrumpers denying services to Trump supporters now want to reverse Avakian’s decision or should they be held to the same standards as the Kleins?