Maine knows that. Now Michigan, Pennsylvania, Florida, and Wisconsin are about to confront the same confusion.

Maine became a test site for camouflaged news in 2018 when a “news” website of anonymous origin, the Maine Examiner, popped up. 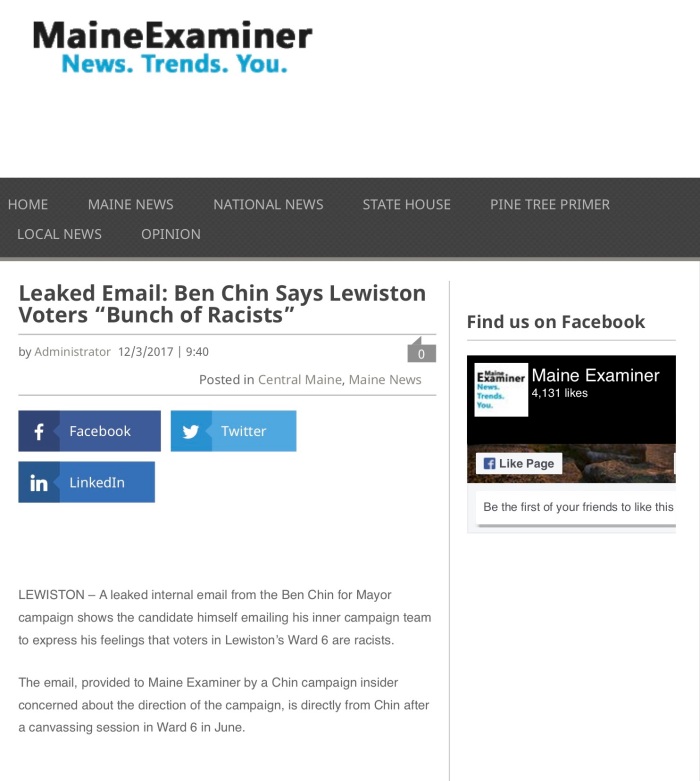 According to a legitimate news outlet, The Bangor (ME) Daily News, the website gained attention in the run-up to a December 2018 mayoral runoff in Lewiston, ME. when it posted several negative articles about the progressive candidate, Ben Chin. One article contained real, leaked campaign emails in which Chin said he encountered “a bunch of racists” while campaigning. Chin lost the election, partly because of the Examiner’s reporting.

(It later turned out that the emails were leaked to Chin’s Republican opponent, Shane Bouchard, by a woman working as a mole in Chin’s campaign who was having an affair with Bouchard. Bouchard resigned as mayor in March 2019 after the woman leaked some of his text messages. They included one in which he described elderly black people as “antique farm equipment”  and another in which he appeared to compare a meeting with his fellow Republicans to a Ku Klux Klan gathering. And you thought only states like New York and Illinois had juicy political scandals)

A top Maine Republican Party official later admitted to state ethics watchdogs that he was behind the Maine Examiner.

Priorities USA, a Democratic Super PAC, is planning to put $100 million into a project to flood swing states — many of which have lost their local papers — with stories favorable to the Democratic agenda, Vice News reported on July 24, 2019.

Priorities USA Communication Director Josh Schwerin tried to gloss over the sabotage effort with a disingenuous statement that Priorities’ “news” was a necessary response to the sharp decline in local news outlets.

“This should be covered by local news, but local news is dying,” Schwerin told VICE News. “Our hope is that we can help fill that hole a bit with paid media…”

What’s not clear is whether the true sponsor of Priorities’ “news” coverage will be completely or partially hidden, as is the case with a conservative-leaning national “news” site called The Free Telegraph.

Only if a viewer clicks on a barely discernable “About” at the bottom of the site is it revealed The Free Telegraph “is a conservative news and commentary platform made possible through the generous support of the Republican Governors Association.”

Then there’s Virginia, home of the Dogwood, “your source for Virginia news.”

If readers click on “About,” they get this: “As the number of local news outlets declines in Virginia and across the country and the amount of digital information surges, it’s hard to know where to turn. We want to fill the gap – and your social feeds – with content that is thoughtful, engaging, inspiring and motivating. We’ll bring you the story behind the story and explore how our readers’ lives are impacted by the news of the day. Our reporting is honest, to-the-point and in the service of our readers.”

If readers want to know who’s behind the news site, they can click on this: Owned by For What It’s Worth Media, Inc.. This will tell them something similar to Priorities USA’s stated rationale for its jump into the news business: “As the number of local news outlets declines across the country and the amount of digital information surges, it’s hard to know where to turn. We want to fill the gap – and your social feeds – with content that is thoughtful, inspiring and motivating.”

What the Dogwood doesn’t say is it also wants to fill the gap with progressive-leaning “news” coverage. Nor does it say that progressive non-profit digital organization, Acronym, has pledged to invest $1 million in the Dogwood and says it plans to invest in other state-based news properties, which could include states such as Arizona, North Carolina, and Pennsylvania.

If you prefer your news with a more conservative bent, there’s The California Republican. Here you can read a story about how the Washington, D.C. chapter of Antifa sent a message to Texas Republican Sen. Ted Cruz by chasing him out of a restaurant, telling the Texas senator that he is “not safe” or an item headlined, “In-N-Out boycott fails miserably in Central Valley.” You can even read about signings by Fresno State’s football program.

But you won’t know the identity of the site’s publisher unless you see the barely visible text at the bottom of the home page, “Paid for by the Devin Nunes Campaign Committee – FEC ID #C00370056.” Nunes is a Republican representative of California’s 22nd District in Congress.

With a steadily shrinking cadre of legitimate news staff and outlets and the rise of political actors willing to play fast and loose with ethics, could Oregon be far behind in this race to the bottom in camouflaged “news reporting”?