So-called educators, by embracing the resistance, are abdicating their responsibility to be adults in favor of capitulating to children. 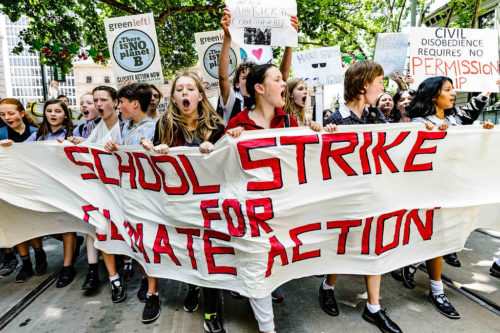 Children skipping classes to protest has become a regular thing, like a scheduled extracurricular activity.

In Sept. 2019, Portland Public Schools said its 49,000 students wouldn’t be punished if them skipped classes to attend the planned “Climate Strike” ahead of the United Nations Climate Action Summit. All they had to do was get an excused absence from their teachers. New York City allowed the 1.1 million students in its public schools to skip classes for the Climate Strike, too, as did many other school districts across the country.

“Civic engagement allows students to apply their classroom lessons to the real world,” said Vaughn Stewart, a Democratic member of the Maryland House of Delegates. “It is impossible for a classroom setting to perfectly simulate the experience of testifying in a hearing or organizing your classmates to march in the streets.”

Now the public schools of Virginia’s Fairfax County, where I lived before moving to Oregon in the 1980s, are implementing a landmark policy specifically allowing students to take time off to participate in protests.

“There’s not a point to our education if we’re not going to be alive in 10 years, 20 years, the end of the century,” a senior at a Fairfax County school told the New York Times.

Starting on Jan. 27, 2020, conveniently after the Jan. 24 March for Life in Wash., D.C. and cities around the country, the school district will allow students in seventh through 12th grades one excused absence per year to participate in “civic engagement activities.”

Fairfax School Board member Ryan McElveen said the rule may be the first of its kind in the U.S. and was made in response to a recent wave of student activism across the country.

“I think we’re setting the stage for the rest of the nation with this,” McElveen told The Washington Post, “It’s a dawning of a new day in student activism, and school systems everywhere are going to have to be responsive to it.”

Be responsive? Sure. Surrender? No.

There’s general agreement that endorsement of skipping school to attend protests tends to come mostly from the left in support of left-leaning causes.

In that regard, measures facilitating and encouraging out-of-school protests are also allowing young people to be weaponized to advance adult political agendas.

The classroom, not the streets, is where students are best positioned to carefully weigh interests and tradeoffs associated with complex issues, to contemplate nuances. The streets are filled with absolutists.

“ …adults have a moral obligation to remain adults in relation to children and not be carried away by emotions, icons, selfies, images of mass protests, or messianic or revolutionary dreams.”

Just as parents are at their best and most responsible when they behave as parents, not friends, with their children, some school administrators need to grow up.

One thought on “Skipping school to protest. No excuses.”